Lock up your Mother!

If it was a competition, Motherlock would be odds on favorite to win the not always coveted ‘Most Controversial Play Award’ in this year’s Fringe circuit. Unashamedly based on the real life experiences of Auckland playwright and director Melissa Fergusson, it explores the stigmas and experiences of her four pregnancies to four different men. Scandalous? You bet.

Playwrights traditionally hide behind metaphor and obfuscate about how much of their work is based on real life. By presenting herself, warts-and-all, Melissa has very much opened herself up to criticism – not just about the play, but about her own life choices. She says audience feedback has been positive, but the play has been given a heavy critical lashing –  “a story told with no purpose and it therefore has no value” writes Theatreview’s John Smythe. Ouch.

Why did Melissa did chose to present her own life? And what does she make of the heavy criticism? I found out.

We live in a confessional culture. Reality TV and Facebook and Twitter updates encourage it… Playwrights are often inspired by their real lives, but it strikes me as still relatively rare for a playwright to openly write about their own lives. Why did you?

I started speaking to a friend about 18 months ago about the children, and they said wouldn’t it be great to write something for the children so they knew a whole lot more about how they came about, and their fathers. It grew from there; it became a draft and went on and on. I met Donna Banicevich Gera and she became my advisor, and she had a lot of encouragement and it grew into a 60 minute monologue.

Why make it non-fiction then, rather than fiction?

I was attracted to writing something that was close to my life, and I just wrote it. I just thought that the content of the play was interesting and that’s why I wrote about it. I didn’t really question myself an awful lot when I wrote it.

And you see the work as being very experimental?

Very controversial in the sense that its dealing with issues, lots of different themes…. mothering a child without a partner, the rapid decisions a woman has to make when they are in a relationship that is breaking down. It’s quite unpredictable as the mother goes along what her next challenge is, and I believe there is a lot of positivity and good outcomes that come about with Motherlock.

You certainly open yourself up for criticism, especially if people don’t agree with the choices you’ve made in your own life and how you’ve presented that onstage. You’ve taken the show to Melbourne, Wellington and will be opening in Auckland next week. How have people responded to the work? There’s no escaping the particularly hostile response from critics….

I certainly believe the audience members, not the critics, the actual patrons that have attended have all really enjoyed the show and I’ve had a lot of feedback from strangers. I believe some of the critics have misconstrued the play in the sense that they thought it was about the whole process of having a child and mothering a child. The script is about the choices we make to become mothers.

I think that there are a lot of stigmas in the play; homelessness, addiction, dysfunction, and yes, the choices I made. A lot of people have become very subjective and dogmatic and not objective about the play and what the play actually means. There are lots of subliminal messages within the play that people just aren’t processing.

Tell me more about how the audiences have reacted in the different places you have taken it so far?

There’s a mix of patrons male, female. Male have been quite alarmed and emotional and very complimentary, saying that they understand more about the female psyche, that they appreciate their mothers more. The females have said that they really connected with the play and they felt very in tune with the character.

So how do you deal with the criticism that you have been receiving?

Obviously criticism is hard to take on the chin, and I’ve read the reviews on a level that I’ve taken on board and thought about what they’ve said. I believe that a lot of it is quite personal, and I think it’s quite unprofessional, especially for a work of experimentation…  a work that is very topical today about women who make choices to have children out of wedlock. The critics have almost cornered me into being promiscuous in what I have done, but one has to remember that it’s over a 14 year period and you can count the men in the play. It’s a woman’s life, that’s all.

What was the process like of converting your life stories to satisfy the demands of theatrical form and language. Did you have to simplify? Change stuff? Make new things up?

There were five drafts that were done.  I know a lot of playwrights write over many, many years. This was written over a year to an eighteen month period from start to finish. There weren’t many changes to be honest. Obviously when Donna and myself and the previous actor work shopped it, we looked at the antagonists and protagonists and questioning the play and what things meant. We went through the whole process and came up with a product that we really liked. 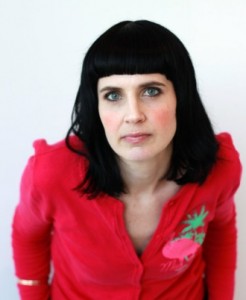 Melissa Fergusson: “I see it as a play that I wrote, about this woman, and her life”

Tell me about the rehearsal process as both playwright and director. Do you have to wear separate hats?

That’s really relevant – as a director I’m quite objective, so the play has always been objective, not subjective. As a playwright, I just see it as a play. I see it as a play that I wrote, about this woman, and her life. Its historical, it ends when the mother is 33, so that’s 5 years ago for me. When I do rehearsals I’m very much the director, so I ask the questions, I work with the actor organically to create credibility on the stage. In the rehearsal process we work through the issues and what things mean and what the Mother was thinking – her age, her vulnerability, what it was like, the cultural shocks – all the different areas in the play that are very important to execute to the audience in how she was feeling. So very much the director.

I imagine that Narelle Ahrens, your actress, brings insights that you hadn’t perceived in the play?

Narelle is a mother, so that was great to work with someone who didn’t have to do all the research of what it’s like to be pregnant and to have a child, in the sense that there was some understanding already of the process. Narelle was a very experienced actor. She did bring ideas – she is also a foley artist. She had a lot of ideas with sound, which we both implemented. There’s now a soundtrack and audio through the whole play now, she was instrumental in that process.

What do you ultimately hope to achieve with the Motherlock project?

It’s showcasing a new piece of work and launching myself as a playwright. As I wrote it I thought it more of a play… yes it’s a personal experience and something I’ve gone through, there are not a lot of fictional events in the play, and most of it is correct and factual… I just wanted to write a play that meant something to me, before I started writing plays about various other things that I observe and want to write about.

What have you learnt about theatre, and about yourself, in this journey so far?

I have become, I suppose, a lot more sensitive in the process, in the sense that I listen a lot more. I think when you’re a director it’s a great skill to listen and take on people’s ideas and feedback and then translate them into your vision. I’ve also learnt to work organically with quite a big team of people, and communicate through that team. I’ve learnt a lot about myself in the sense that it’s really what I love and where I’m going in my life, it’s definitely where I belong.

Why should people come see the show and give it a chance in Auckland?

I believe it is a new piece of theatre that people won’t experience very often. It’s quite edgy… yes, there is a person’s life at stake… but I see it as a piece of art. I see it as a journey that I want the audience to be involved in, and be morphed into what the mother is doing and all the transitions in her life from 21 to 33. It is one woman’s life… all those experiences, and through the challenges, the positive outcomes that can happen. One doesn’t have to be down on their luck or on the DPB, one doesn’t need to be dependant… so it’s just really benchmarking woman in this modern world to be independent and full of self-belief.