The story and tribulations of the performer – whether it is singer, dancer or actor are an over-familiar cliché: Auditions, rejections, the pluck from obscurity, fame, selling out, rise and fall. Struggle.

A Chorus Line, the beloved 1975 Broadway Musical is a definitive going over of these themes. Based on taped sessions with real Broadway dancers, over the course of an intense audition, the histories, hopes and dreams of the performers are revealed. It strips away and lays bare the Broadway dream, before renewing it in a stunning chorus line number.

Local collaborative show Confessions of a Struggling Thespian works within this framework, and owes a debt to Chorus. For the ‘Thespian’ in the title, exchange with ‘Broadway Musical Theatre performer’. A performer, of course, that is needed to be a triple threat – actor, singer AND dancer. The 16 strong cast, mostly adopting American accents and theatre blacks with the odd accessory as costumes, perform vignettes on the typical performer experience. Monologues and scenes – touching on themes like audition nightmares and finding your identity on stage act as bridges into a broad range of Musical theatre songs.

The evening is loosely based around an audition, the performers stepping out to reveal and confess aspects of their character. The opening number I Hope I get it, fittingly is from A Chorus Line, giving us a teaser of many of the night’s performers , and the perfect song to set the tone of the evening (“I’ve come this far, but even so It could be yes, it could be no,”. I’m impressed by the cast musicality and their strength together in full voice – the small Upstairs Basement space ringing with music.

It’s a difficult space for such a large cast to work in; excepting a few near misses they maneuver through it well   – when not “on” the actors sit in numbered chairs surrounding the edge, as if waiting for an audition call. It’s actually quite a special treat to be so close to the performers, even if sometimes you can’t help but get a full view down to their lungs!

Throughout the show we meet a range of performers with different quirks and points of view.  Samantha Fox makes an early memorable impression as someone who wants to give up her life in Opera, where she doesn’t fit in, and find her real identity in the Musical Theatre world. Her understated performance of A Change in Me, from the Broadway version of Disney’s Beauty and the Beast was beautifully expressed and communicated.

Hannah Reid takes us through the horrors of the audition cattle call process, and gives a witty performance of Climbing Uphill (The Last Five Years) about the inner neurotic voice of an actress, focusing on anything but the performance she’s singing.

Caitlin Penty expresses her frustrations of being pigeon-holed as an Alto in Alto’s Lament, where she reveals she really wants to be a soprano and get to sing the melody, showcasing her suitably remarkable voice – traversing the high and low notes with ease and comic poise.

Often the pre-song scenarios suffer from the weight of cliché or just limply written, not acting as a sufficient emotional springboard to burst into song (a problem when taking songs out of their own show context). With much of the show performed in a heightened MT style, some additions of drama, such as a character feeling down about telling about the reaction to his coming out, seem forced. What sells the show though are the confident and assured performances of the songs – Cain Parangi recovers from the difficult preceding scene to bring the house down with powerful anthem I am a what I am (La Cage Aux Folles). As a camp choreographer taking the auditionees through the paces of a Mamma Mia dance number earlier in the show, Cain wins the audience over in a comic way as he breathlessly names each of the ridiculously cheesy moves (“and crabby, crabby, crabby…”)

The most successful scene/song transitions are often the lighter ones. A new male’s arrival has the cast asking the perennial question if he is gay or European in a mash-up of There, Right there and If you were Gay from Legally Blonde and Avenue Q.  A terrible, half-improvised rehearsal of the balcony scene from Romeo and Juliet, with burning tension between Jareth Hutchings and Alexandra Clare escalates well into What is this Feeling? from Wicked as the company join them in expressing their mutual ‘unadulterated loathing’. Both were standout performers – Jareth given the task of closing Act One with a soaring This is the Moment (Jekyll and Hide), and Alexandra with a running joke of being a star and a diva, having fun with Chicago’s Roxie.

The song choices are refreshing, encompassing a selection from many lesser known and unappreciated musicals. Sure, there’s SingStar favourite A Whole New World, but the choices from the bigger musical like Wicked or Phantom are not of the most famous numbers. Even for a self-confessed musical theatre geek, there were a few welcome discoveries. Songs without any baggage worked well, such as Astonishing from Little Women which closes the night and re-expresses their drive: “I will not disappear without a trace / I’ll shout and start a riot / Be anything but quiet”.

There is one original composition by Grace Shelley, which she performs, called I don’t have the stage. It’s a bittersweet song about giving up the dreams of a stage career, and being okay with it. I don’t know if it’s biographical or not (and judging by her performance I hope not), but it was the most honest moment of the show, acknowledging that few Broadway dreams are fulfilled.

Confessions of a Struggling Thespian presents not so much the dream of being a Broadway-type performer, but the ‘dream of the struggle to be a performer’ – the trials you are meant to go through to become an authentic struggling actor. The opportunity is missed to drop the accent and hear more about the real performer’s hopes and struggles rather than the universal (how does one make it professionally on the limited Auckland and NZ Musical Theatre stage? Can you even?) , but perhaps this dream of struggle is better than the real thing, and gives hope.

The Acting Out Theatre Company, who presented the show, is run by and for Under 35 old actors, providing opportunities for roles and stage experience. If this group is any indication, there are some gifted members amongst its ranks. The cast also direct each other’s scenes. Mark Bradley is kept busy on piano with a range of songs, and even given his own moment in the spotlight with a sardonic Right before my eyes (Letstat).

Confessions is a joyous, and yes, cheesy celebration of performance and Musical Theatre and being true to yourself- cynics are banned. The songs are big, the dreams are big, and the young performers’ talent even bigger.

Confessions of a Struggling Thespian is presented by Acting Out Theatre Company and plays at The Basement until until 21 January. More information at The Basement. 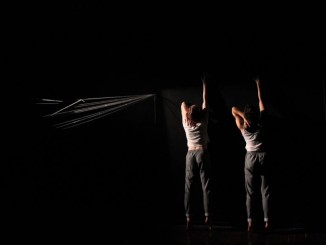 REVIEW: We May Have to Choose (Auckland Fringe)