Virginia Frankovich’s directorial debut for Silo Theatre explodes across the Basement Theatre stage with an astute understanding of the complexity of Alice Birch’s text. Last year Silo proved that they are not a company to pander to the mainstream sensibilities and once again they present us with a piece of self-dubbed feminist theatre that attempts to unpack, navigate and challenge the language and behaviour that the patriarchy has weaved into our daily lives.

Entering the space, you are presented with a messy stage that looks more like a poorly organised backstage than a performance space, but soon enough, the actors begin clearing it away leaving a blank white canvas.

The play intersperses projected slogans such as “Revolutionise the language (subvert it)” in between the vignettes that make up the narrative.

The first piece, between Fasitua Amosa and Sophie Henderson, sees Henderson’s character challenge the “to fuck” and “be fucked” construct in response to her partner confessing his overwhelming passion to “have” her. Both actors carry the scene with comic timing and a knowing that encourages the audience to chime in with agreeing whoops and smirks. This is the type of scene you would expect from this narrative and is delivered well, but the beauty and chaos is yet to come. As the scenes progress Frankovich slowly begins to subvert expectations as the subject matter veers away from realistic scenarios and into more absurd and fantastical territory.

A beautiful moment of subversion comes at the end of one scene that entertains a dystopian land in which motherhood is rejected and genders are divided. The scene, primarily featuring Michelle Ny, Henderson and Amanda Tito, with an amusingly pointed cameo from Amosa, builds a stunning emotional tension between a mother and daughter that is broken using purposely shoddy special effects as an effective middle finger to convention. Liberties are taken with the original script but the choices made are clever and add a peppering of commentary rather than distracting from the main focal point of the text.

The entire creative team involved in the show are incredibly talented and the actors are no exception. The stand out performance comes from Amanda Tito. Watching and engaging with Tito feels more like being privy to a genuine moment of truth rather than watching an orchestrated performance. Her ability to simply be present keeps all eyes on her, from when she gorges on a watermelon, all the way through to her systematic break down of the plays discourse. Ny, Amosa, and Henderson also have shining moments in the piece and confidently hold their own both individually and as an ensemble. It’s interesting to see such a visually imposing male figure onstage who manages to blend in and stand out all at the right moments, and never once takes focus away from the inherently feminist discourse (unless of course the text calls for it).

As previously mentioned, Silo have continued a path to create theatre that questions social, political and cultural discourse whilst still managing to balance their mainstream audiences, which calls for some recognition. Theatre such as Revolt speaks for change but often the type of people who feel compelled to watch activist or protest theatre are not the people who need to hear the argument.

Here Silo are creating a valuable and much needed space to invite in mainstream audiences and present them with challenging theatre. It should also be noted the way in which they present their theatre plays a part in this success. At no point, did it feel as if the play or performances were attacking the audiences for being a part of a greater problem of patriarchal narratives, but instead production presents the issues and flashes the mirror back onto the audience without being overtly accusing. By choosing to educate over alienate the possibility of actual change of thought and action is more likely than if we were to leave feeling attacked due to the fragile nature of the unoppressed. It’s comforting to see a theatre company grasp the full extent and implication of the space in which they work in. Here’s to more thoughtful theatre from inception to stage, and to the conversation that follows.

Revolt. She Said. Revolt Again plays at The Basement as part of the Auckland Fringe Festival until 11 March. Detail see Silo. 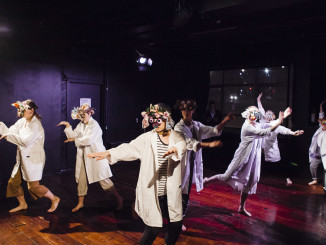