Amy Waller, Claire Van Beek and Julia Hyde are a talented and triumphant trifecta. Starring as the Cheer Blacks in their play Death by Cheerleader, they deliver a 10/10 performance not only showcases some great acting and comedic flair, but some high energy and impressive cheerleading routines, restricted only by the height of the Basement.

When the preshow music has Rihanna’s ‘Rude Boy’ rocking loudly through the Basement, you know you are in for a good time.

The second of the ‘Rugby’ orientated plays on at The Basement this week (we at TheatreScenes promise to stop mentioning the Rugby soon!), Death by Cheerleader follows a dysfunctional cheerleading team who win the chance to cheer for the All Blacks in the 2015 Rugby World Cup in Dubai (nicely sidestepping any need for reality) after the mysterious death of the other three place getting cheer teams.

Waller plays Jessica, the head of the cheer blacks. She claims to be 28, though the truth is that she’s an aging (yet still flexible) cheerleader increasingly anxious to ‘make it’ before it’s too late. She’s got an unhealthy obsession with All Black captain Tane Smith, who she is not allowed to talk to or make eye contact with. Waller completely sells it.

Waller recruits Lucy (Claire Van Beek) from an institution to cheer in the team, who comes with her own secrets. Van Beek is insane fun and has excellent timing as she pushes her character’s humour into some dark and dodgy places.

Rounding out the team is Julia Hyde as Dakota, Jessica’s put down upon daughter. ‘Normal’ compared to the other two’s extremes – she’s not really into cheerleading, but is also desperate to please Mum. Less showy than the other two roles, Hyde’s sardonic character has some great moments.

Director Benjamin Henson and the three actresses together make a great team, the play’s action paced and amped up for maximum laughs. Waller, Beek and Hyde bounce off each other well, both in the comedy and the physical cheerleading routines.

These routines, to such quintessential cheerleading hits as ‘Hollaback girl’ and ‘Everybody dance now’ , and featuring moves like the ‘window washer’, are a standout. Not only funny, they are delivered with skill and endless energy by the talented ladies.

More satisfying than all 5 of the Bring it On films put together, Death by Cheerleader has the spirit and much, much more. Its season is all too short, so if entertainment and pom poms are what you are after, cartwheel to the Basement now. 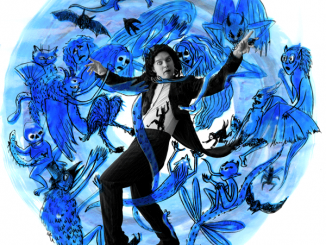 2 Comments on REVIEW: Death by Cheerleader