A one-woman show augmented by a combination of back-projection and eclectic soundtrack choices, Girl You Want is the theatre equivalent of speed-dating as writer-performer Tessa Mitchell takes the audience through her experiences growing up in the 80s.

For a show with so many components, Mitchell and her collaborators deserve a lot of credit for how tight and economical the show feels. Directed by Chris Jannides and Prue Cunningham, this is an extremely focused production. In under an hour, Mitchell covers more emotional ground than most shows do in 90 minutes.

Indeed, its pace might be the show’s greatest asset — with Mitchell speeding through various characters, musical interludes and slide shows, Girl You Want does a good job of approximating the emotional highs and lows of late adolescence and your early 20s:

From first shitty flat, to first shitty jobs, and first arrest — Mitchell covers all these milestones and more with humour, pathos and great tunes (anyone who uses Sam Cooke to aurally illustrate a character we never see is doing something right).

Even the ending —involving Tessa crossing another major threshold— acts as an oddly effective cliffhanger on which to end the show. The fun times are over, and real adulthood has arrived to bring the party to an end.

Hopefully there’s a sequel, because on the strength of this, Mitchell has plenty of material to work with and the talents to craft it into something both exciting and poignant.

Definitely worth a look. 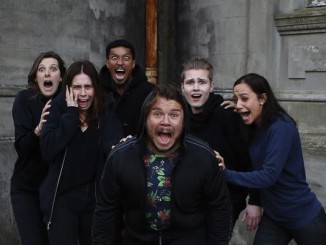