[Down where it’s wetter]

Entering the Spiegeltent for Meow Meow’s Little Mermaid is an experience in itself- on opening night there was an anticipatory queue even half an hour before the show started. We were ushered into an intimate in-the-round theatre with a thrust stage- my elbows were basically digging into my friend’s side for the whole show- yet this seemed to add to the hazy, sultry atmosphere that most of us hope for when attending a cabaret.

Little Mermaid is described as a “decidedly un-Disney cabaret, where sexy spectacle drips into a bittersweet take on what constitutes a ‘happy ending’”. Meow Meow turns to Hans Christian Andersen’s 1836 original, darker version of The Little Mermaid and plunges us into her subconscious.

Meow Meow, the alter-ego of Australia’s Melissa Madden Gray, is delightfully spectacular and commands the space wonderfully. The audience is treated almost immediately to her delicious wit and self-deprecating indulgence in the quest for love and all its meanings. Gray’s powerful vocals and acting chops alone are worth the ticket price- it’s pretty stunning watching her belt through a few light aerial tricks, held up by two ropes. She is complemented capably by Chris Ryan, whose strong tenor voice and comedic timing provide a great vehicle for the materializing of the fantasized “real-life prince”. The show is supported with stellar accompaniment by the Siren Effect Orchestra, under the musical direction of Jethro Woodward, playing a surprising mix of genres from 1940s jazz to Radiohead.

All the wonderful glitz and glam aside, I was left feeling quite uncertain about whether it had indeed achieved its clear aims of a “feminist submersion” of “a fairy-tale gone rogue”. The success of such an aim depends on a carefully balanced navigation between the two separate spaces of the real-life show that Meow Meow was putting on, and our view into her subconscious. However, the murky switches between these two worlds means leaves us unsure exactly we are and why we are there. Individual scenes present us with strong images, like the assembled mannequin of Meow Meow’s old lover’s body parts and her blow-up doll twin, but too often these images are then tucked away a song or two later without follow-through.

What makes Hans Christen Anderson’s original story of The Little Mermaid so potently tragic are the high stakes that eventuate in female sacrifice in a male-dominated world. Ariel must give up her voice for the ability to walk, which renders her unable to protest when the Prince runs off with another woman and leaves her stuck, unable to return home, in a foreign land. While Meow Meow symbolically ditches her fins for legs when her dream prince declares that he is a leg man, the stakes of what happens if Meow Meow fails to seduce him in order to find love is not clear.  As a result, the potential for a deeper emotional connection with the audience at obvious points is lost- my emotional investment in Meow Meow’s journey did not feel earned.

There is no doubt that the show is embedded with some extremely clever and poignant arguments that are meant to resonate with the audience. Nonetheless, it still had me craving a full, 10-course meal of critical thought, instead of a mere peppering of light feminism for the masses. The murkiness of what lies beneath our quest for love never quite bubbles to the surface

Regardless, the ride down to the depths sure is fun. Meow Meow’s Little Mermaid is a wonderful night of entertainment, audience participation (Meow Meow attempts to crowdsurf around the whole tent), boisterous laughter, and some pretty magical moments of beauty. 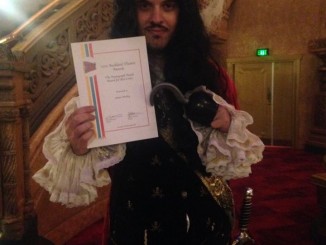 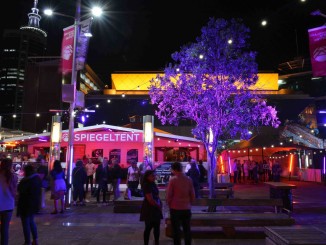 SCENE BY JAMES: The 2016 Auckland Arts Festival in Review