Music, Me and Mayhem! [by Sharu Delilkan]

It was like going to visit an old friend turning up at Mangere Arts Centre for my first review of the year.

For Valentine’s Day evening, Victoria Schmidt’s brand new work Music and Me was an interesting choice, to say the least. Particularly since it was billed as telling the harsh realities of four individuals, struggling to survive in a forgotten world of prostitution, mental illness, substance abuse, depression [and you’ll have to come along to find out the rest].

But tell four stories it definitely did, cleverly interwoven and utilising the hilarious interplay between the characters.

It took a while for the show to commence but the time that we sat there staring at the set gave me a sense of what was in store. One half of the stage was clearly a hairdressing salon, Dazzling Shonte’s Hair & Beauty, while the other half with crates stacked high was not as obvious. The red lighting initially gives the salon a bordello-feel but when the lights come up it a shocking pink leopard skin décor is revealed, complemented by numerous Madonna posters.

The Madonna theme runs throughout the local hairdresser’s (Amanaki Prescott-Faletau) dialogue, which is cleverly peppered with familiar lyrics from Madonna’s songs such as Papa Don’t Preach.

First time playwright Schmidt, who plays Alex the homeless thief and rapper, should be commended for her authentic use of Pacific Island phraseology that gives South Auckland its unique colour.

The overall story of Music and Me, which follows the lives and friendships of four outcasts living on the same poverty-stricken street, is nothing new. However, the Pacific Island flavour given to the language and gestures of each character is what makes the play unique in its own right.

The four-strong cast works very well together. However Iaheto Ah Hi steals much of the show with his portrayal of the wheelchair bound Jr aka Mr J. His portrayal of the old man sinking deeper into dementia is brilliant with his constant unexpected outbursts, forgetfulness and general eccentric, erratic behaviour.

Prescott-Faletau is excellent as the hard-bitten, struggling hairdresser. Making her stage debut, she brings the house down with her delivery of some fabulous put-downs.

The drug addict Ricky (Natano Keni) is the ‘butt’ of many jokes with particularly memorable lines such as “no one gets a job with their nipples exposed” and “what’s the deal with the queer guy with the black eye”.

The humour in the script shines through with some well-timed confusion and hilarious one-liners. However, the poignant moments that explain the situation and relationships of these four characters seemed to struggle for authenticity a bit on the show’s first night. I felt that more attention could have been given to the emotional parts of the play, allowing the piece to transform ‘an hilarious show with sad bits’ into ‘a moving story with moments of brilliant hilarity’.

Such a transition wouldn’t take much given the script’s potential.

Overall Schmidt should be applauded for her work and encouraged to bring more of her observations from page to stage. Her honest, hard-hitting view into the underworld of the desperate, dispossessed and abused is brave and Schmidt should be credited for her tenacity in attacking themes that often get swept under the carpet.

This well-written and observed piece, that can only get better with a little tweak or two after first night jitters, should be seen by all. It’s an insightful piece and a valid voice of the future.

Music and Me plays until 18 February at the Mangere Arts Centre. Details see Music and Me. 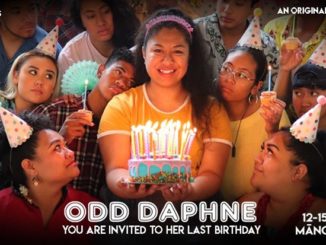