In the split second between the first mention of the titular Phoebe and the reveal of who she is, there is a glimmer of hope in Michael Gow’s script, but, like the rest of the play, the moment, and the opportunity, is lost to make way for pseudo-dramatic conflict and life-changing subplots, the latter of which are dropped as quickly as they’re raised. Sweet Phoebe is the second play presented in Auckland this year in which an award-winning Australian playwright has decided that verbal accounts are more interesting than action, and while this is certainly not a pandemic problem, it does not support the desire to bring our antipodean brethren’s stories to our shores [Editor’s Note: which follows, also, in the wake of poorly recieved Between Two Waves by Oz’s Ian Meadows].

Presented by independent theatre company, Both Sides Now, whose aim is to span the Tasman Sea (at least from Melbourne to Auckland at this point), Helen (Amy Usherwood) is an interior designer and Frazer (Nick Simpson-Deeks) has been given a big account, and if that doesn’t concern you, it should. Any intimacy in their marriage requires an awkward vocal exchange, but there’s no time to explore that, because drama!

Lighting (uncredited due to the lack of programmes) highlights the myriad scene changes that ensure with inconsistent states of theatrical death (at one point providing a colour I can only refer to as vomit-yellow), while the actors desultorily meander in half-light and force themselves to emotionally prepare for the next round in this relationship drama that avoids relationship drama. This is just one of the examples of where director Marcel Dorney fails his actors.

The only thing worse than seeing bad actors on stage is seeing good actors with bad direction. Both Usherwood and Simpson-Deeks have talent enough that could work in the right play, but here they are so clumsily mismanaged that even their despairing attempts at reverting back to acting safeguards continues to prevent them from engaging with what little drama exists in the script. Simpson-Deeks is unfairly weighted with ridiculous emotional outbursts, and while Usherwood manages to find a comfortable position to pitch her performance, this can only occur once the play inexplicably shifts from a dialogue to a series of monologues.

By then, however, this production, like the script itself, is too late to recover. Any possibility to initiate a genuine progression in the opening scene is lost, as the play devolves from a potentially poignant drama to a lesson in how high crap can be piled. What could have been a play illustrating a couple’s shift from a calculatingly cold, yet content, marriage to a cathartically organic relationship through classic canine intervention, becomes nothing more than a wall to which desperately flung mud has stuck. And all this for a dog. 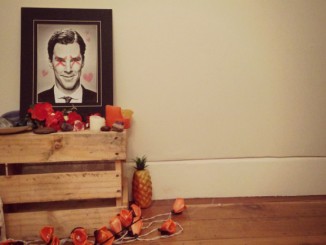