In a similar vein to last year’s White Rabbit Red Rabbit, Silo Theatre presents a production that’s success banks almost entirely on each individual show. Appropriately titled, actress Natalie Medlock literally has no idea whom she is about to meet, the show more or less improvised around some narrative points and direction via text and mobile phone calls. While director Tanya Goldberg mentioned that even the disasters make for interesting dates, there will inevitably be those that come together in a more theatrically fulfilling way. Fortunately, the calibre of actors Silo has supplied is high.

Brad Knewstubb’s bar construction and Celery Production’s set design successfully transforms The Basement mainstage into a fully-functioning and immersive karaoke bar, where patrons can sing songs pre and post show and even order a drink during. Karaoke Queen Bryony Skillington serves the drinks and cues the characters’ songs to assist the narrative structure, though her own willingness to sing is in opposition to her surly demeanour.

There are subtle variations to Medlock’s characterisations, but, from the two shows I witnessed, it is more or less the same character but with different objectives. Seeing the show twice, one is immediately able to identify the structure of the play and some of the methods used to incite particular narrative lines, as well as the most obvious variation; the Mystery Date.

The dynamics between Anna and her Mystery Date is key to show’s success. The Mystery Dates on the two shows I attended were Chris Parker and Jonny Brugh, and the difference between these two actor-comedians and the characters they brought is a perfect example of my point. Where Parker brought a light and youthful innocence (as well as an unforeseeable twist), Brugh’s objective of not having sex worked as an essential “no” to all of Medlock’s improvisational offers.

Goldberg’s role requires a huge amount of attentive commitment – even more so than the performers. While some might consider improvisation the greater challenge, there is a freedom found in structure, and it is Goldberg who must keep in mind the overall journey of the show. The best part of The Blind Date Project is not only does every show bring something new of its own, it provides greater context and comparison to any previous viewings, a fact that makes me want to see it again, and again, and again…

The Blind Date Project is presented by Silo Theatre and plays at The Basement until November 18. For details see Ticketmaster. 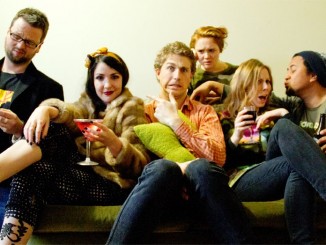