I absolutely loved the joyous, poignant, hilarious and expressive storytelling from Massive Company’s The Wholehearted.  The hugely talented ensemble cast displayed absolute heart and soul through their committed revelation of numerous stories that were immediate, relevant and easily accessible to the enthusiastic audience.

Despite running for a quarter of a century, Massive  Company have definitely not rested on their laurels, particularly when producing The Wholehearted.  In fact their fresh approach to this new work can be described as a great combination of ‘the tried and tested’ experience that this company boasts, as well as mirroring current social trends.

The dynamic duo of devising doyenne Sam Scott and upcoming director Scotty Cotter is undoubtedly a force to be reckoned with.  The yin-yang working relationship of these two directors gives the audience a remarkable journey from start to finish.  And the outstanding pace that the 90-minute show demonstrated on opening night was equally fabulous – which I’m sure was aided by their previous stint at the Mangere Arts Centre.

Having seen a majority of Massive Company’s iconic works in their illustrious portfolio, including Sons of Charlie Paora and The Brave, I was pleased to see their bold choices to break away from their formulaic devising technique.  These fearless decisions resulted in an incredibly cohesive piece of theatre containing the elements of a successful show, including comedy, drama, poignancy, relevance and fresh ideas.

With Scott at the helm for the past 25 years, we have come to expect a certain standard of excellence.  But her ability to truly share the reigns with the likes of Cotter has resulted in a phenomenally radical piece of theatre that’s not only fantastic but shows amazing foresight.  Such profound artistic choices are rewarding for us as audience members.  But it is also heartening to know that Massive Company is bound for longevity in the foreseeable future.

One thing that really struck me was the physicality of the whole piece.  Although not credited in the programme, I understand that Lemanu was responsible for these mean moves that totally enhanced and delighted in equal measure.  The visual gags and mime worked just as well, adding even more sparkle to this already polished production.

The crowd also lapped up the dialogue that cleverly interwove recognisable pop culture references like LOTR, Dr. Who and other similarly well-known ‘classic’ literature.

Christine Urquhart’s set and Jane Hakaraia’s lighting were effective with the three on-stage banners providing shadow effects upstage. The cast interacted frequently with the props depicting hearts – which also doubled as furniture excellently – if a little cryptically at first.

The tongue-in-cheek way in which the ensemble dealt with rather emotional themes such as courage and lack of self-esteem, really hit home as we roared with laughter – something that has left a lasting impression.  Personally I also took away a very subtle message about the Black Dog, which plagues many of our acting fraternity on a daily basis.  A truly valiant attempt to address these issues, using humour to hit these messages home with heightened effect.

I feel compelled to reiterate how exceptional and brilliant the cast was in expressing their feelings through words and movement.  The spectrum of sentiments varied from comedic through to longing, rejection, loss, fear and self-loathing.  And as a bonus to being entertained, we were also cautioned that there are consequences when we don’t follow our own hearts …

The Wholehearted is presented by Massive  Company and plays at Q Loft until 10 April.  Details see Q 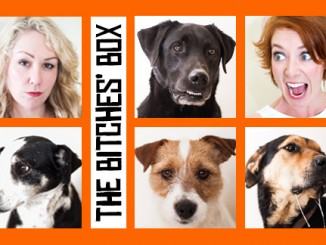