Rarely have I seen a show with such a clear vision that was so completely at odds with the material it was based on.

Written and directed by Carly Wijs, Us/Them is a re-telling of the 2004 Beslan school siege from the point of view of the children who experienced it.

The early sequences, in which two children (performers Gytha Parmentier and Roman Van Houtven) draw a chalk outline of the school while trying to one-up each other with their knowledge of the school, are promising. The evocation of two kids squabbling over who can impress the adults is hilarious and kind of touching.

The set (designed by Stef Stessel) is ingenious – a chalk outline of the gymnasium where the siege took place ‘constructed’ by the performers. As the story slowly takes shape, more elements are added: Black balloons with long dangling lines almost to the floor, and, finally, a complex arrangement of taut strings forming a weblike prison around our protagonists.

Parmentier and Van Houtven are terrific here – comedy can be hard to translate, but their physicality and verbal sparring is both perfectly timed and feels completely attuned to the maturity level of their characters.

While Us/Them‘s conceit is intriguing, and promised to be a unique approach to the tragedy, by the end of the show I had no clear idea for why that choice of perspective had been made.

At no point does the show’s perspective feel like it is building a thesis about the effects of events like this on children, or how they view the world. The show is so focused on its comic tone, that when real elements of the siege are referenced (people dying from heat exhaustion; having to defecate where they stood or sat; the roof collapse), they never hit home. Its a tonal problem: the show is played so comically that all attempts at pathos feel perfunctory. In fact, the tone ends up working against the focus on the kids and their attempts to re-imagine the crisis as something more benign – every time their fantasy is punctured by reality, it feels like a punchline. The joke comes off as if it is on the kids.

The final sequence exemplifies the ways the show’s comic focus ends up belittling the victims: it is based around the girl – now dead – rejoicing in the fact that she has become famous. Footage of her corpse being removed from the gymnasium has been playing in newscasts all over the world. Her only disappointment is that the less attractive side of her face was facing the camera. And that’s a joke. It’s also the end of the show.

There is a potentially interesting bit of satire to this scene, as the kids discuss the different music choices used when the footage was replayed in different countries. This would work in a show about the way media treats tragedy – but putting that in this show, and playing it from the kids’ POV feels like the joke is on them for being superficial.

The other related issue is that there is no sense of juxtaposition between what happened, and the children’s perspective of it. It feels like a case of using the wrong medium to convey your message. If this were a film or a book, this collision of tones may have worked. As a theatrical experience, with only two actors surrounded by string, chalk and balloons, the conceit never has the weight that its makers are striving for.

Once the siege begins, everything that I was previously interested in – the actors’ performances, the set design and the comic music choices – collapses in on itself to reveal the production for what it really is: a pretentious trivialisation of a terrible event that strips it of all historical, political and cultural context in favour of a unique dramatic presentation that means nothing beyond itself.

Us/Them plays at Q until 25 March as part of the Auckland Arts Festival. 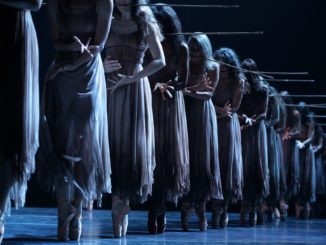