Vernon God Little is a controversial play for a controversial time. In the wake of Trump’s America raising its ugly head, now is almost too easy a time to dissect American culture for all its faults. Director Leon Wadham has taken that chance with the graduating class of The Actor’s Program who tell the tragically satirical story of Vernon Little and American dysfunction.

The script is an adaptation, penned by Tanya Ronder, of the highly acclaimed book by DBC Pierre. It was famously performed at The Old Vic in 2007 and received a mixed reception. On the one hand critics appreciated the fast-paced adaptation for its differences from the original text, but others criticised Ronder for stripping away the quality of the book and resorting to an over generalisation of American culture instead of a cleverly written satire. In Auckland 2016, Wadham’s take on the script doesn’t prompt such polarising opinions.

The play opens moodily with Vernon Little (Sebastian Dudding) squeaking his way around a two by two metre stage in his underpants and sneakers, causing a few titters. We quickly learn that Vernon has been detained under suspicion of being an accomplice to murder, namely the massacre of 17 young students by his best friend, Jesus Navarro. Vernon claims his innocence, but as Deputy Vaine (Jessi Williams) lectures Vernon about the type of people who conveniently create the grey area between fact and lies, we learn that Vernon is holding back vital information regarding his whereabouts that casts doubt over his claims.

Dudding portrays Vernon with a convincing sincerity from start to finish and his eager naivety is nicely balanced with the burdens he carries on his young shoulders. Vernon’s story introduces us to a myriad of Martirio* townsfolk that are played convincingly by this year’s graduating class. The accent work is jarring to begin with, but mostly strong across the board. Only a few actors play one single character with most having to don completely different personas throughout. Due to misinformation and the meddling of out of towner, wannabe TV persona Eulalio ‘Lally’ Ledesma, Vernon soon finds himself framed for murders he did not commit and on the run, heading to Mexico.

The amalgamation of set, lighting and sound design effectively navigates the spaces between the Texan state and Mexico City, using a bare, minimalist stage and strip lighting. At times the actors are obscured from certain points in the audience which is a shame as the action is not to be missed. If you have time to look up you’ll notice the walls are covered with commercial billboards that echo the commercialisation of modern America. While the concept feels a little on the nose, this play is not one for subtlety. From the choice in colour scheme, burnt orange and royal blue, to the jazz-hands country western musical numbers, such as Galveston by Glen Campbell, the show takes the brash and flash and serves it up on a rhinestone platter for the audience to enjoy.

Stand out performances come from Dudding, Jarred Blakiston’s measured performance as Lally, Simon Mead’s chilling and precise performance as Dr. Goosen, and finally Bronwyn Ensor as Vernon’s mother. Ensor successfully take an inherently unlikable character and milks sympathy from the audience by giving her a side of vulnerability and desperation mixed in with her satirical comedy.

Wadham presents an insane world with this play that could easily blur the lines between satire and distasteful comedy, however, it’s clear he has a firm grip on the commentary he wants to achieve. The play rarely touches on the real victims of the crime but instead focuses on the commercialisation of horror and presents a place in which everything and anything is marketed as show business to be devoured by the public – and they do, hungrily. As for the graduating class, this is an interesting choice of play given the sharing of roles and limelight, however, the production does a grand job of showcasing their talents.

*Fun fact: The town in which Vernon lives, Martirio, is ironically given the Spanish word for martyrdom.

Vernon God Little is presented by The Actors’ Program and plays at The Basement until 25 Nov. Details see The Basement. 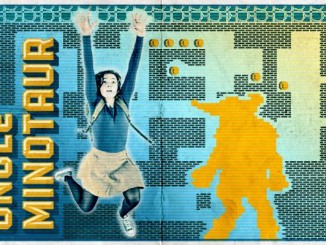