It seems only fitting that director Shane Bosher return to Auckland to direct a play from his bucket list for the company he co-founded. Presented by Silo Theatre and Auckland Live, the title of Mike Bartlett’s Laurence Olivier Award-winning play may put some people off, but it epitomises the raw honesty of the dialogue which drives Bartlett’s script. We’re fortunate that New Zealand’s LGBTQ+ rights and protections are some of the most advanced and liberal in the world, and yet bisexuality remains as elusive as it does anywhere else. Which is why, even eight years after debuting at the Royal Court, Cock is just as relevant in Auckland in 2017.

An acting teacher once told me that every scene is about either the beginning of a relationship, the end of a relationship, or the beginning of the end of a relationship. Not content with one, or even two, of these circumstances, Bartlett infuses all three in a battle for not only love, but also identity. These are not easy characters to play, and the cast do an admirable job of portraying them without hesitation, warts and all. While Matt Minto’s physical particularisations appear superficial at first, once his character, M, has something to fight for (and consequently Minto has a strong objective to play), he sinks into the role, fighting tooth and nail. Matilda Ridgway, as W, on the other hand, is a more elusive character. It’s difficult to see what she (or even M, for that matter) sees in John, played by Duncan Ragg, who, due to his confusion, is figuratively disabled from having not only agency, but identity. This is not to suggest the dismissive notion that a bisexual is simply confused, because Bartlett uses the context of John’s sexual questioning to allow the true content to come forward: “… it’s about who the person is. Not a man or a woman but What they’re like. What they do.”

W is a capricious character and Ridgway does an excellent job in justifying her actions, as does Minto as M, but at times the underlying love that should drive the latter remains hidden. John’s indecision is not easy to play, and while Ragg’s performance is somewhat one-noted, his neurotic characterisation imbues him with an empathetic amiability. And while not making a decision is making a decision in its own right, the play’s ending, which leaves its audience on a knife’s edge (and had me internally screaming my preferred response), is the only possible way for John to, ironically, find his own voice.

Every audience member will bring their own story to this play, so it’s a shame the emotional weight of some of the most devastating utterances I’ve ever heard on stage were missed in an attempt to pace through to the laughs, and while the audience did indeed laugh on opening night, too many moments were missed which could have made the piece truly resonate.

I have no doubt that Cock will stimulate discussion amongst its audience. Although there are three sides to the story, it will ultimately come down to Team M versus Team W. Those who outweigh the bad with the good of either character. Those who believe in sticking with the devil they know and those who believe in taking a risk with the unknown. Either way, it’s for people who believe in fighting for a relationship. But relationships cannot be reduced to such simplistic statements as the aforementioned, which is what makes Cock such an emotional struggle for both its protagonist and its audience. This is amplified by not only Bosher’s avoiding superfluous movement or maintaining the clarity of the casts’ objectives, but also his strict adherence to the stage directions. Bartlett dictates a particular perspective for COCK‘s audience, and it is from this viewpoint that much judgement will come. 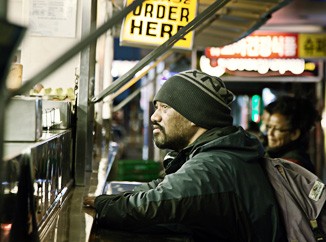