The one-woman show has become a prominent staple of The Basement’s repertoire over the last few years. While offering individual theatremakers the space and opportunity to develop deeply personal and politically-charged works, audiences have been regularly gifted the chance to witness our most talented artists create highly responsive work in a volatile political climate. What surprises (but shouldn’t) is the overwhelming breadth of dimension and nuance that these voices bring to the ongoing conversations within our culture.

The latest practitioner to enter this pantheon is Victoria Abbott with her impressive Run Rabbit, directed by Kate McGill, which expands on these voices without being derivative of them. With a presence that can command the likes of Q Theatre’s Rangatira (in Red Leap’s Kororāreka) and the Pop-Up Globe (Much Ado About Nothing/Othello), it’s an intimate privilege to see her work her magic in the tight confines of The Basement’s Studio. While the venue is a considerable downsize in terms of scale, there’s never any loss of grandeur in her performance or in the scope of the show.

She skillfully introduces the space to us, breaking down the mechanics of her dramaturgy and displaying metatheatrical awareness (respectfully citing Fuck Rant’s Nisha Madhan), delineating between the many Victoria Abbotts in (and outside) the play. Rather than simply reducing herself to the binary of character and the actor, she further fragments herself into the specifics of social and personal selves. This is further complicated by the introduction of “characters” that she plays such as the rabbit, and further again with characters who are not her at all (Black Agnes, Chauvinist Male Pigs).

Those concerned with the self-congratulatory nature of being self-aware shouldn’t be frightened off though. Everything is handled with the clarity of a master at the top of her game. This isn’t meta for the sake of being meta, but to elucidate the many multitudes we inhabit.

The whole piece is anchored confidently by the introduction of Victoria’s great ancestor, Black Agnes, a character fit to stand side-by-side any character in Game of Thrones, a beacon of both female strength and survival. We are thrust into the trenches of chaos that Agnes herself had to face, playing along with Abbott’s dramatic reenactments and effortless displays of audience participation. As an anchor, there are moments where Agnes’ presence weighs the show down in the action-packed theatrics when more of Abbott’s personal self would bring greater insight and context. But it’s hard to blame Abbott for being drawn and caught up in the world of her impressive ancestor; Agnes is the exact sort of person that inspires romantic idolisation.

It’s the lineage not only from Agnes to Victoria(s) that is paid homage to, but the legacy of all powerful women that we can feel reverberate throughout the ages and, implicitly, through this shared space. One feels the indelible shadow in the deeply personal politics of Alice Canton’s WHITE/OTHER and Hayley Sproull’s Vanilla Marika, Jo Randerson’s battle cry of Banging Cymbal, Clanging Gong, Julia Croft’s Power Ballad language games, right through to the examination of female performativity in Ella Gilbert’s Soft Tissue.

There are so many things to unpack and praise in the production; it is a well-realised beast of a show, filled to the brim with careful details and theatrical savvy. The set is suggestively cluttered by astroturf and faux-greenery, evoking Scottish highlands with simplicity. On top of that, sound and lighting cues are integrated perfectly to shift us back-and-forth between the historical and contemporary worlds of the play. There are both subtle and bombastic moments of sound design.

The neatness of the structure does create a predictable rhythm to the show at times, but its Abbott’s ability to fully realise these moments that brings them to vivid life. If it offers little in the way of twists, the sheer craft of the writing delivers a punch. Many will enter the space knowing and expecting Abbott to impress with her acting chops, but the impeccable construction of the show will leave audiences awed by the rigor and wit of her writing. Her brief and cutting spoken-word-inspired interludes that punctuate the show, toying with homonyms and wordplay, have stayed with me long after the curtain call.

At the moment, the games between Abbott and the audience are clever and confidently handled, but don’t reach the heights of her performance or the writing. With the talent exhibited here, though, it’s exciting to imagine what a fully-realised version of the show might look like. Where every component is equal parts a masterclass.

Embedded in the DNA of the show is a bubbling violence and ferocity. One that Victoria doesn’t shy away from. In the blink an eye, the show transforms from parodying to sinister. This is theatre with a bite. Even in the seemingly hysterical characterisation of her rabbit lies something too slippery to define. An incredibly funny gag in other hands is trickier in Abbott’s. Refusing to be pinned down simply as a ditsy embodiment of femininity, and snapping into unexpected rage, she winks slyly and knowingly at us. This is a performance wrapped up in ambiguity, drawing connections from all over.

With Run Rabbit, Abbott cuts to the heart of the matter: survival. From the trenches of battle, to the seemingly delicate nature of tiny creatures and the everyday terrors of walking home at night, this is a blistering evening of fight or flight. If, at first glance, Abbott seems to show how fractured and disparate these individual personas are, she brings everything together seamlessly, showing their parallels and similarities – illuminating the never ending path of animal survival as something universal, spanning across both time, space and even species.

Run Rabbit plays at The Basement until 4 August. 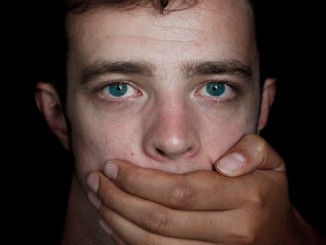