A Basement. A room that is a trope in itself. We all know how the scene plays out: one dim light sets a glow upon forgotten objects, lurking shadows creep up the walls at odd angles; we have entered the resting place for the old, unwanted or unused, and it’s the perfect setting for a horror story. This is the very place that The Basement Tapes, an award-winning piece of theatre brought to Auckland by Chapel Perilous, invite us to enter.

Previously performed in Wellington at both BATS and Chaffers Apartments in 2017, and then toured to the 2017 Melbourne Fringe Festival, The Basement Tapes has received multiple nominations and awards, among them Outstanding Performance, Best Director and Melbourne Fringe Tour Ready. Over the show’s 55 minutes it becomes clear that this is a team who deserve the accolades. Performer Stella Reid carries the show from start to finish with undeniable skill. Exploding onto the stage with a much-better-than-your-average dance routine, Reid portrays the awkward quirkiness of someone who truly thinks they’re alone and free from judgement. She then easily hands herself over to the emotions that interrupt her task of cleaning out her deceased grandmother’s basement. The entire show centres around an old tape recorder she stumbles across and a set of mysterious tapes that uncover a deadly family secret.

It’s not uncommon for work that is performed at theatres such as BATS or The Basement to be politically and socially charged, especially in the current political climate, so it’s a change of pace to see a piece of theatre that doesn’t claim to be anything more than it is – a solid piece of storytelling. The Basement Tapes strikes a fine balance of suspenseful narrative, comedy and clever timing. At its core, this play is a ghost story – regardless of whether you believe the ghost in question is real or the granddaughter is simply losing her mind. With the exception of the interruption of the pizza delivery guy, played by Joe Wright, the play locks you in with Reid to watch this thriller play out.

Most people love a good tale of horror and suspense, but it’s uncommon to see them tackled on stage. Horror can be very difficult to achieve in live space, as opposed to film, for a multitude of reasons. Having a live audience means your technical timing not only has to be precise, but must be carefully measured with the momentum of your audience’s reactions. In film, you create and build your suspenseful elements mostly in post-production and only once and the camera lens restricts what you can see. In theatre, despite clever blocking, you can choose to look wherever you want which can alter your experience of the how the suspense builds.  Tapes’ director Jane Yonge chooses to work within the parameters of what we know can evoke powerful responses from our audiences: a strong blend of audio and visual elements controls our scope of vision, overwhelms our auditory senses and allows for suspense to seep into the space, building to an impressive crescendo in the final five minutes. By limiting the space to a small fixed focal point, the audience is given the opportunity to act like they are part of the old furniture in the room, quiet and still but privy to the action, never giving Reid a reason to break the fourth wall and the tension.

The sound design, created by Thomas Lambert, seems more ambitious than your average show, combining an evocative soundtrack, taped recordings (Marjorie Mckee is credited as the voice behind the haunting recordings) and diegetic sound, all consistently weaving the play together and contributing to the building tension. An impressive use of sound culminates in the climax of the piece where the booming, resonating speakers reach 105 decibels, reverberating through the audience. For reference, 105 decibels sits within the same range as that of someone screaming into your ear, a rock concert or a car horn. It would be interesting to know the frequency (HZ) in which the sound design operated in, as there are studies that focus on the effect of sound physiologically upon the human body. According to James Larson who wrote about and conducted an experiment on the physical sensation of sound (specifically bass), different frequencies can provoke somatosensory responses from pressure in the chest, tingling, headaches and overwhelming senses of anxiety. The study speculated that sound emissions at a specific frequency might cause some people to feel ‘haunted’. It is fascinating how far we can push a convention we usually deem to be aesthetic to a more psychological and physiological arena, and then manipulate that for effect. Knowingly or not, the effect of having 105 decibels in a small, bricked up space definitely makes us jump like cats and feels unsettling.

The lighting design, by Jason Longstaff, also deserves a mention for its quality and precision in helping to build suspense. The lighting sources are carefully chosen and utilised, defining which space we are occupying – reality vs ethereal. It would be easy to call some of the lighting choices clichéd, however, horror is built upon clichés for a reason, and when put in just the right order, revealed at just the right time, they work, and boy do they work well. Tapes is a clear example of using tried and tested horror conventions and making it work all over again.

What really makes this show stand out is the personality of the team behind it. The text, created by Jane Yonge and Stella Reid, is funny and endearing, and Yonge manages to successfully allow for Reid to flick between humour, genuine emotion and fearful suspense from one moment to the next, whilst still holding a solid structure to the show. There are some moments where the performance could be a little more refined, or where the lines seems a little obvious, however, these minor critiques don’t take away from what is an overall exhilarating and enjoyable trip to the (Basement) theatre. 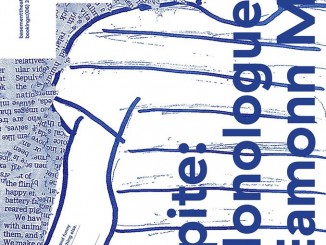